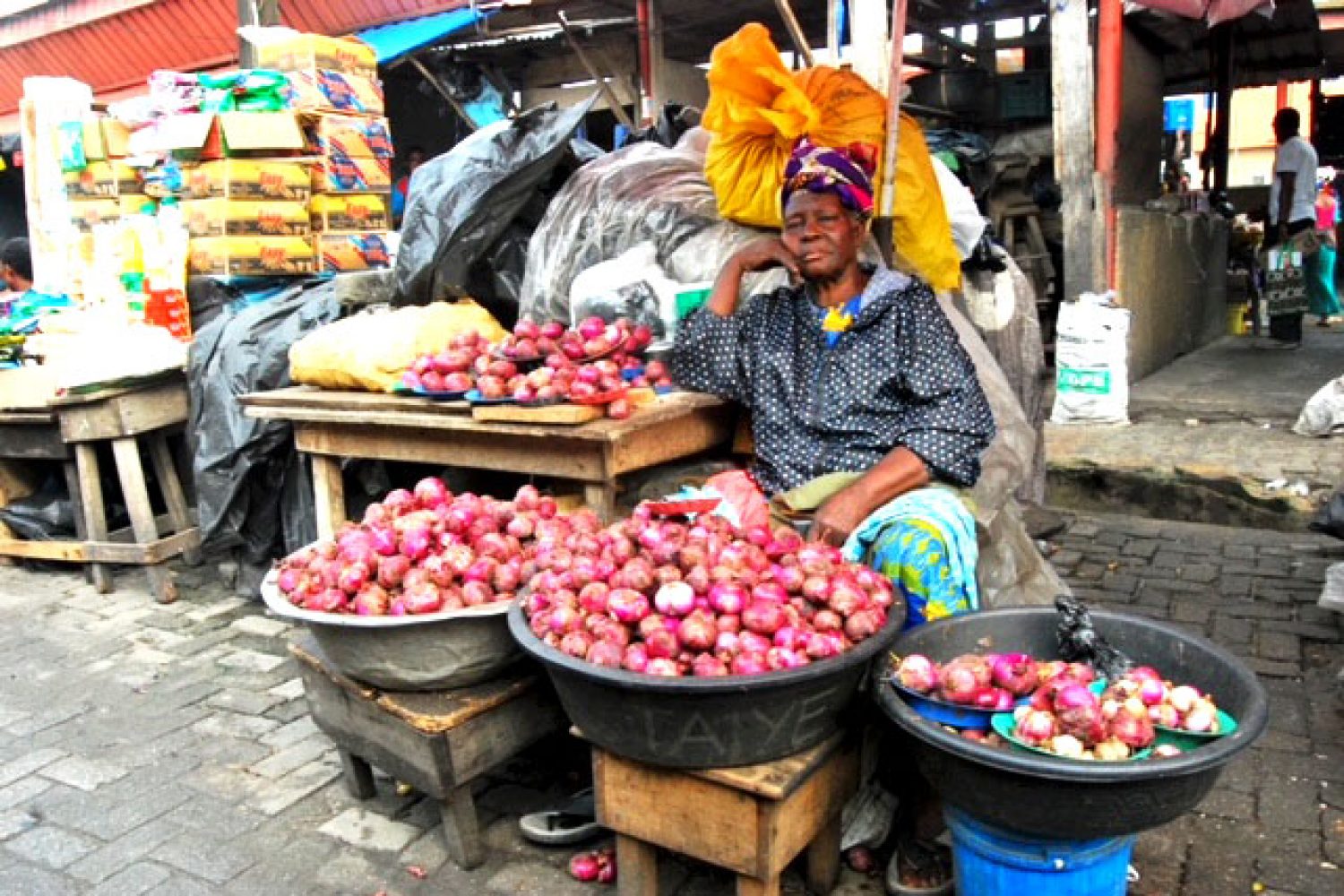 1. HEARTS100 PUT A ROOF OVER MY FAMILY’S HEAD, BOOSTED MY BUSINESS

‘My name is Lydia Chibueze, I am a 26-year mother of four. The day we left the dangerous abandoned building where I lived with my husband and four little children and moved to the new apartment, I cried, those were tears of joy. My husband Moses was also rolling on the floor of the new house, singing. We were truly amazed how kind hearted human beings could be.

In April 2020, during the country-wide lock-down exercise as a result of the COVID-19 pandemic, members of the Lagos Environmental Task Force came to demolish our house at Ifelodun community in Lagos. They claimed to be from the Ministry of Environment and working on a drainage system but it was during a lock-down directed by the same government. Many families were rendered homeless.

There was a lot of outcry led by CEE-HOPE and some other groups and the exercise was stopped, but by then, our family alongside several others had lost their houses.

We had no money and were barely able to eat so we had no choice than to move into an abandoned old building which had no doors or windows. Snakes and all sorts of dangerous creatures were our constant companions alongside some street urchins. It was a horrible experience especially for my little children. My husband, a taxi driver, could hardly make enough for us to feed so we continued staying in the abandoned building whose owner had died long ago.

On September 19, I gave birth to a baby boy all alone in the house because I couldn’t afford to go to the hospital. Five days later, the Hearts100 team came to visit after hearing of our plight. They gave us the Hearts100 food pack, small money in addition then a few weeks later, hired a decent apartment for my family and I and even put some furnishing.

We are now in the new apartment and we are all so happy and grateful. Hearts100 also gave me a business grant so that I can continue with my fruit business which stopped several months ago due to lack of capital.’ 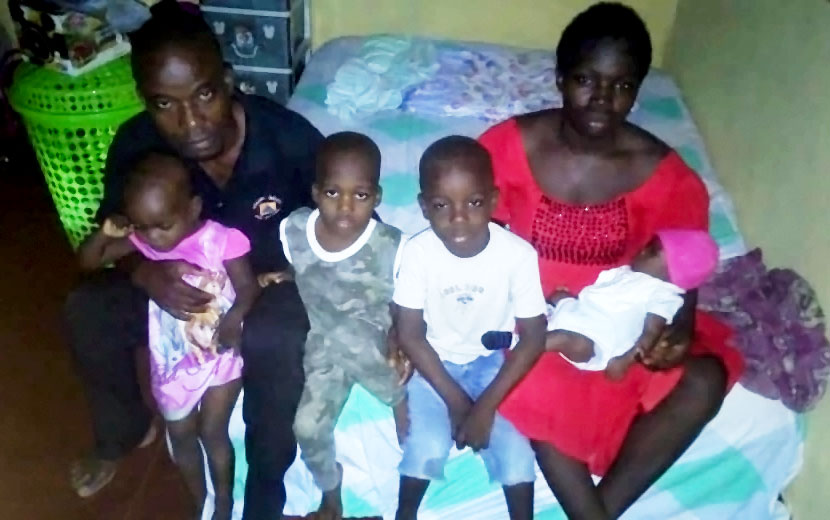 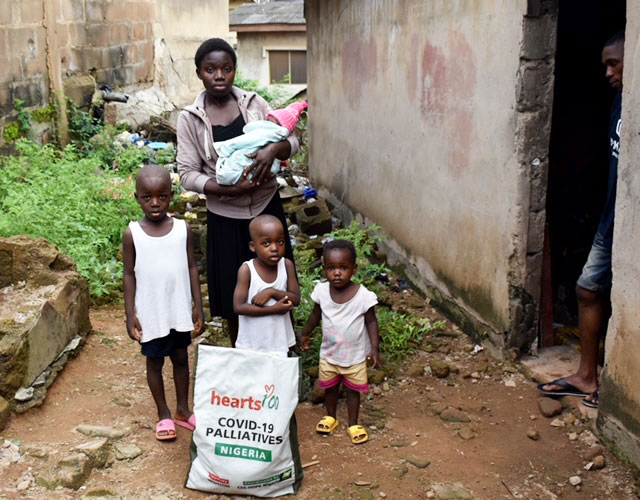 2. HEARTS100 CAME TO THE AID OF MY BUSINESS AND HEALTH

The day I got the business grant from Hearts100 team was one of the greatest days of my life.

I had been selling at the Makoko Fish Market for more than 20 years now. I had a shop here before but the government demolished all the small shops and built bigger shops which I couldn’t afford, that’s why I am still outside selling onions. With no help from government whatsoever, I have been surviving on this trade and the little help I get from my five children.

The Hearts100 discovered me during their visit to our market and gave me a business grant which has gone a long way to boost my business. I was also unwell at the time after falling ill while visiting my village for a funeral event. The money came very handy for my drugs as well.

I can’t thank Hearts100 enough. Thank you very much!’ 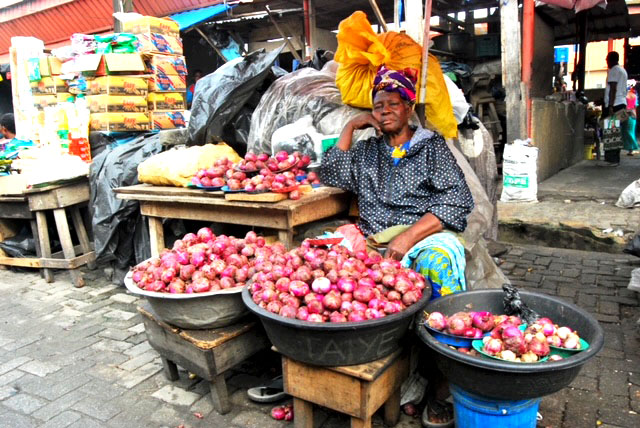 ‘When I lost my husband Chief Timothy Asinpona eight years ago, things fell apart not only psychologically but also economic-wise. He was shot dead by a policeman attached to the Lagos State Task Force as he approached the team for a peaceful talk during one of the many attempted forced evictions of Makoko (Nigeria’s biggest slum settlement), on July 21, 2012.

My husband was a fisherman, I came to Makoko as a teenage girl and had been involved in the fish selling since then, so all my life has been about the fish business. Normally, my husband would give me some of his fish cathces to sell after returning from fishing on the Lagos high seas then I would make lot of profit. However, after his death, I had no capital to continue to sell fishes anymore. I had to buy smaller quantities on credit from the wives of other fishermen. Life has not been easy at all for me and my four children since my husband’s death. The COVID-19 lock-down worsened things and at a point we were virtually starving.

But the grant from Hearts100 came as a miracle; I am now able to boost my capital and also feed my family better. It will also help support the education of three of my children who are still in school.

Thanks so much, Hearts100, I am simply speechless.’ 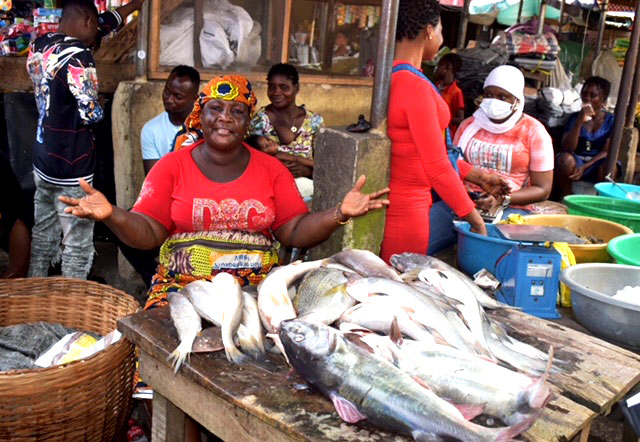 4. I WAS STRANDED WITH MY CHILDREN, HEARTS100 CAME TO MY AID

‘My husband Onyeka Obielozie died in June 2020 at the height of the COVID-19 pandemic in Nigeria, after only three days of illness. He was only 29 years and my baby was just a month old then. We had only been married for four years.

I was devastated and could hardly cope with my children as feeding became a problem.

I had to look for a way to survive with my children so I started selling second hand bedsheets and bags, and disposable shopping bags.

One day in October, the Hearts100 team discovered me at the market when they came to empower the women. They gave me a business grant and that has helped greatly to boost my business. It is like a miracle. I am deeply grateful.’ 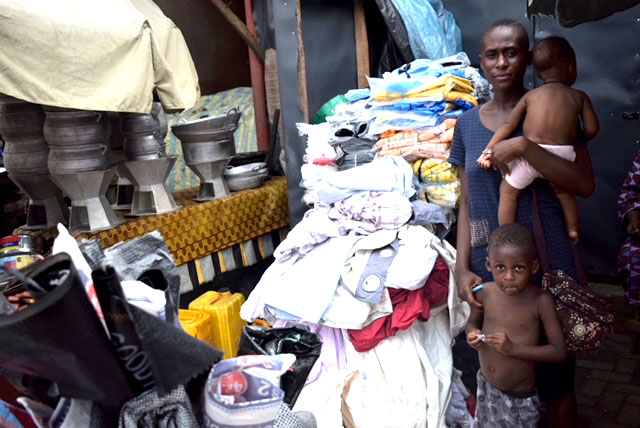 ‘The business support I got from Hearts100 came like a bolt out of the blues. I was seated by my business premises outside the gate of Otto Market Lagos selling roasted plantain (boli) when they approached me and gave me the money, just like that!

I am now 82 years old and life has not been easy. The government that should help old people like us are the same making life miserable for us, thus I really appreciate this support from non-government people.

You see, I used to have a full food items shop. During a demolition exercise more than 25 years ago, the Task Force team pulled down my shop and carted my goods away. I felt like I had been stripped of everything. And that would be the second time of encountering government’s injustice. We used to live in Iddo community down the road but our houses were demolished to make way for road construction and big market and we had to move to Mushin, another poor community, which is why everyone calls me ‘Iya Mushin’ (Mushin’s mother).

After crying for a long time, I had to resort to roasting and selling plantains from the feeding money given to me by my children. I have eight children and my husband has died long ago. When I clocked 80 two years ago, my children tried to stop me from continuing selling roasted plantain but after staying at home for five months I fell ill due to idleness and had to return to this business. It helps me feed well in addition to helping me stay fit.

Hearts100 is God-sent. This business support will go a very, very long way to improve my business. 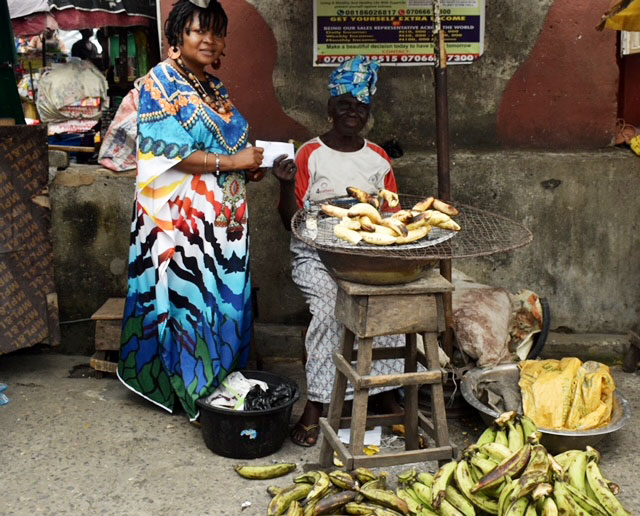 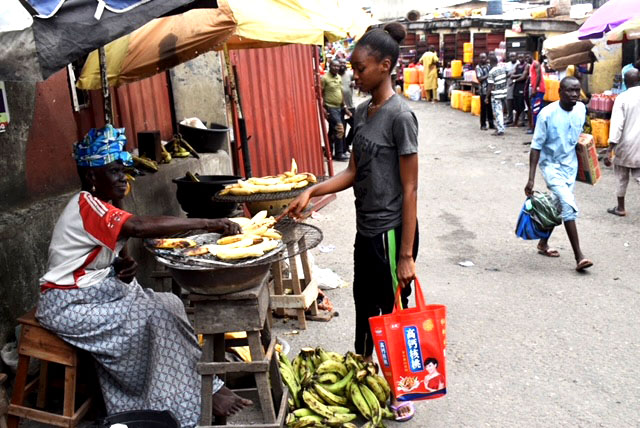 6. HEARTS100 REVIVED MY STOCKFISH BUSINESS, RESTORED MY HOPE IN HUMANITY

‘I am Ifeoma Nnammani, I am 22 years old and I sell stock fish. I finished secondary school at age 17 but could not go further with my educational dream as there was no money.

I thus left Enugu State for Lagos to sell stockfish for my uncle who has a big stockfish shop. After serving him for three years, he set up a small shop for me about a year ago.

But due to the economic depression especially with the COVID-19 challenges, most people feel that stockfishes are too expensive and go for cheaper fish varieties. This has really affected my business as sometimes I do not make a single sale in a whole day.

Now with the support from Hearts100, I will be able to get more stock in anticipation of better sales at Christmas sales. It has also restored my confidence in humanity—how complete strangers can come to one’s help just like that. It has also strengthened my resolve to pursue my educational dream.

I am deeply, deeply grateful. Thanks so much, Hearts100! 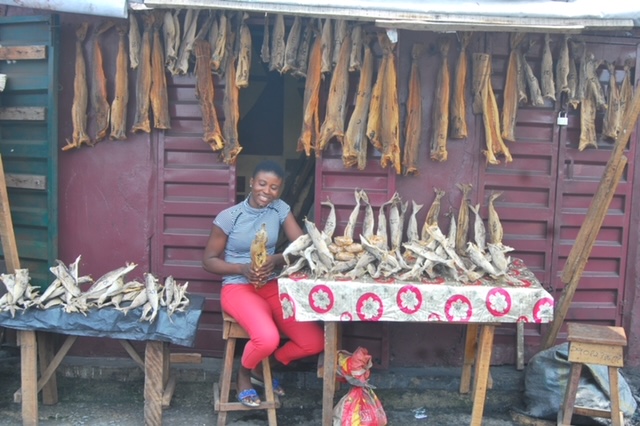